Just like that, world politics and economics changed in a sweeping vote in the U.K. The leave camp amassed a majority 51.9% of the vote according to CNBC, enabling the U.K. to leave the European Union. (1).

According to Jessican Shankleman of Bloomberg, billions of pounds are at risk if the country disowns its stake at the European Investment Bank, which aided renewable and energy efficiency projects worldwide (2). In fact, Britain has claimed nearly a quarter (24%) of the 7.2 billion pounds invested since 2007 from the largest green bonds issuer. Peter Munro, head of investors relations for the EIB, said he is not certain if the U.K. would continue to receive funding by stating: If you’re not a shareholder or you’re not part of the EU, you wouldn’t derive the same privileges as a shareholder or an EU member”. Britain’s outsized share can be seen in the graphic below. It receives over double what the next country Italy gets. On a good note, the EIB does not intend to recall loans or enact contract renegotiations. 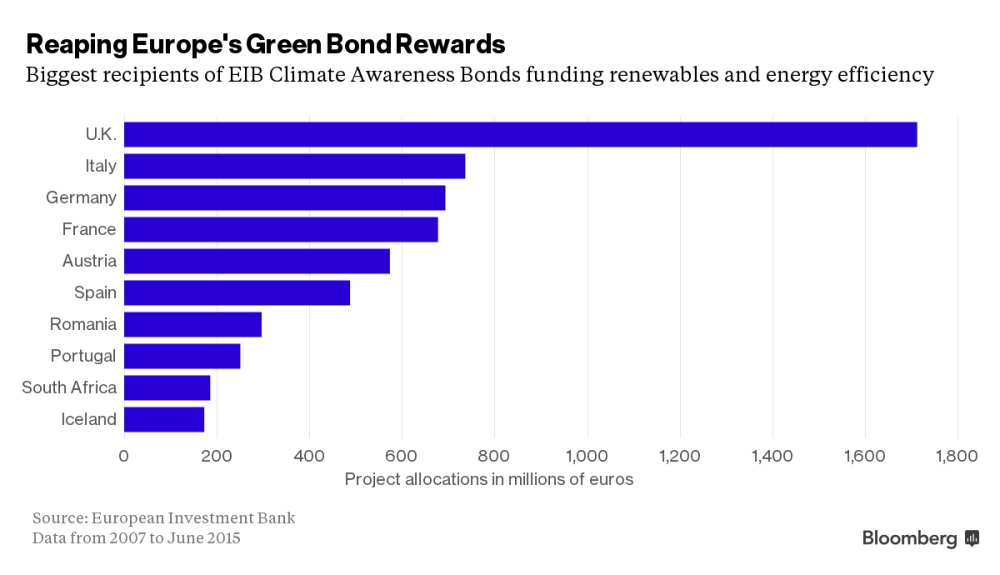 There are other effects the leave could have on clean energy projects from solar to wind according to the IBTimes. Antony Froggatt, a researcher at the independent London policy institute Chatham House, stated that the Brexit vote has the potential to create job cuts, lower the price of the pound, and decrease business investment (3). It is important to note that it may take up to 2 years for the U.K. to formally leave the EU.

Concerns have also been voiced about Britain changing its approach to the Paris climate agreement by being less aggressive at combating emissions. Now London does not have E.U. regulations to prohibit them from funding nuclear projects. In fact, the U.K. has frequently endorsed shale gas sources that other E.U. members would be more hesitant of. The Remain camp has defended their position by saying that leaving would weaken the country’s bargaining power for gas prices. The Leave camp refutes this by stating the E.U. proposals requiring member countries to help out neighbors in a gas crisis would hurt businesses and the economy back at home. Additionally, potentially billions of pounds will be saved by not having to pay into the E.U. anymore.

The effects of this vote will ripple to the E.U. itself. Christiana Figueres, U.N. climate secretariat chief, said that Brexit would cause the E.U. as a whole to reexamine their proposals from the Paris summit since now the U.K. has departed. “From the point of view of the Paris agreement, the U.K. is part of the EU and has put in its effort as part of the EU, so anything that would change that would require then a recalibration,” she said (4).